What is Epidermolysis Bullosa (EB)? 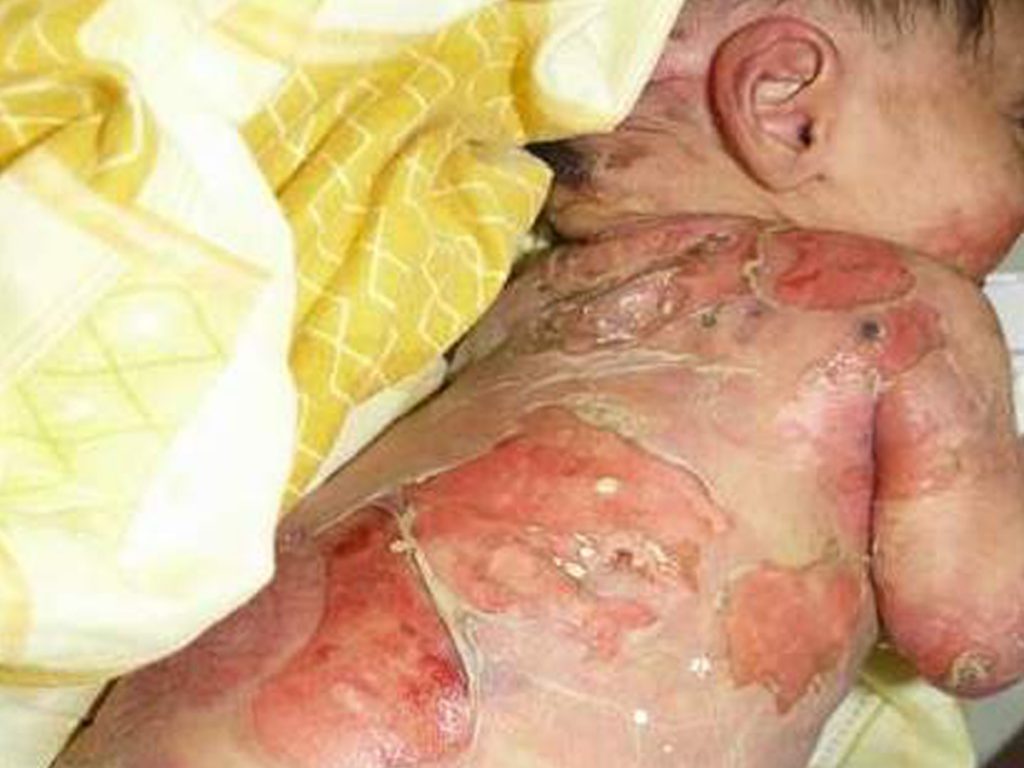 Epidermolysis bullosa, or EB, is a group of rare genetic skin diseases characterized by fragile skin that can lead to extensive blistering and wounding. It affects skin and mucous membranes, particularly of the gastrointestinal tract, genitourinary and respiratory systems. It is a debilitating disease affecting a small number of people, thus earning it an orphan-disease status. The disease has no definitive cure and all current treatments are directed towards symptom relief.

More information about epidermolysis bullosa can be found at debra of America, a non-profit organization supporting the EB community.

The science behind epidermolysis bullosa

At the most basic level, the hallmark of the most common form of EB is poor anchoring of the epidermis to the dermis such that the skin and mucous membranes of the affected individuals tend to shear and blister on minimal friction. This is due to the genetically inherited defect in certain genes (multiple genes have been shown to be associated with the different subtypes of EB) that code for some specific proteins that are involved with maintaining the integrity of skin and mucous membranes.

There are four main subtypes of the condition according to J.D. Fine’s 2010 publication “Inherited Epidermolysis Bullosa”. Each of these subtypes can display a spectrum of phenotypic severity reflecting the types and combinations of mutations in different genes, together with modifying environmental factors. The table below shows the pattern of inheritance and the defective genes and proteins in each, based on management’s review of relevant scientific literature including J.D. Fine’s 2016 publication “Epidemiology of Inherited Epidermolysis Bullosa Based on Incidence and Prevalence Estimates from the National Epidermolysis Bullosa Registry”.

EB Simplex.This is the most common form of EB and is characterized by a lack of adhesion of the skin directly above the basement membrane (the basal layer of the epidermis). An estimated 55% of people with EB have EBS resulting from a genetic defect of the keratins K5 and/or K14. The most common form of EBS manifests itself as blistering confined to the hands and feet while in others blistering can occur all over the body. Blistering generally appears during the neonatal period but it can also manifest itself in later childhood (or even in adult life). Painful skin blisters are accentuated by friction, especially on the feet where footwear causes increased irritation. Friction injuries tend to occur more commonly in warm weather and secondary infections are common.

Junctional EB. Junctional EB is characterized by a lack of adhesion of the skin through the basement membrane and affects some 5% of those with EB. The generalized type of junctional disease (about half of cases of junctional EB) is usually fatal in infancy. This is often a result of anemia and malnutrition due to poor feeding caused by the serious blistering in the pharynx and esophagus. The milder form of the disease can cause life-long pain and disability.

Dystrophic EB, or DEB. DEB is characterized by a lack of adhesion of the skin under the basement membrane. Approximately 30% of people with EB have DEB. Patients with DEB tend to develop blisters that heal with fibrosis, leading to joint contracture, fusion of the fingers, contractures of the mouth membranes and narrowing of the esophagus. Often, the dominant inherited type of DEB is the least severe type and the patient can lead an almost normal life. However, the severity of the condition does increase with age due to scarring, syndactyly and generalized skin atrophy. Those with recessive DEB have a high chance of developing a squamous cell carcinoma, often before the age of 35.

Kindler Syndrome. This type of EB is rare and usually becomes apparent at birth or soon after. This condition is called mixed type because blisters appear across the skin layers. The condition usually improves with time and can disappear. It is the only type that causes patchy discoloration (mottling) of skin exposed to the sun. Kindler syndrome is recessive.

Epidermolysis bullosa acquisita is a rare type that is not inherited. The blisters result from the immune system attacking healthy tissue by mistake. It’s similar to another immune system disorder called bullous pemphigoid. It tends to cause blisters on the hands, feet and mucous membranes.

Generalized blistering caused by any subtype may be complicated by infection, sepsis, and death, especially in infancy. Severe forms of EB increase the mortality risk during infancy. In patients with EB that survive childhood, the most common cause of death is metastatic squamous cell carcinoma.

This skin cancer occurs most frequently in patients with recessively inherited DEB who are aged 15-35 years. In contrast, dominantly inherited EBS and dystrophic EB and milder forms of junctional EB may not affect a patient’s life expectancy adversely. Diagnosis of EB is at birth or shortly after. The exception occurs in mild cases of EBS, which may remain undetected until adulthood or remain undiagnosed. The disease appears to have equal incidences in both sexes. According to debra of America, Epidermolysis Bullosa, or EB, affects 1 out of every 20,000 births in the United States (approximately 200 children a year are born with EB).

Prevalence and incidence of EB can also be derived from the National EB Registry, or NEBR, which collected cross-sectional and longitudinal data on about 3,300 EB patients in the United States from 1986 through 2002. The prevalence of EB was estimated to be approximately 11 patients per million people, and the incidence approximately 20 patients per million live births. Assuming that mild cases of EBS are reported only 10% of the time, the affected population in the United States is approximately 12,500; other sources cite populations of up to 25,000 in the US.

As a genetic disease, EB has no cure and, as an orphan disease, there are no approved products specifically for this indication. As presented in Fine and Hintner’s 2009 publication “Life with epidermolysis bullosa (EB). Etiology, diagnosis, multidisciplinary care and therapy”, effective management of EB patients involves a collaborative approach between several specialists, including surgeons, dermatologists, ophthalmologists, dentists, psychologists, physiotherapists and geneticists. The aim is to provide support to the patient by alleviating symptoms and managing complications. In particular, the patient caregivers must assess and act daily to treat the wound/enable wound healing, address the current level of pain and itch, provide adequate antimicrobial protection, reduce inflammation (as a source of depressed wound healing abilities) and address the emotional state of the patient.

Current medications are employed in control of pain (various types of analgesics including nonsteroidal anti-inflammatory drugs, or NSAIDS, tricyclic antidepressants, gabapentin and narcotics) and pruritus (antihistamines etc.) and to address complications such as local infection and septicemia (local and systemic antibiotics). Steroids and phenytoin are also used in managing dysphagia-associated pain.

Tetracycline is considered to be beneficial in improving the blistering and epithelial disadhesion. The complications of these classes of medications are well known and the drugs are most likely to further complicate the patients’ conditions since they will be used on long-term basis. InMed’s INM-755 cream for the treatment of epidermolysis bullosa

INM-755 is a cannabinoid topical cream under development for the treatment of epidermolysis bullosa. The active pharmaceutical ingredient (API) in INM-755 cream is cannabinol (CBN), a rare cannabinoid. INM-755 is the first CBN formulation under development for EB to advance to clinical trials. Following the completion of two Phase 1 trials in healthy volunteers, InMed filed Clinical Trial Applications in several countries as part of a global Phase 2 clinical trial of INM-755 (cannabinol) cream in EB. Responses from the National Competent Authorities and Ethics Committees are expected throughout July and August 2021.