How Biosynthesis of Cannabinoids Could Impact the Cannabis Industry A highly disruptive technology that I have discussed over the past few years appears to be gaining traction. Biosynthesis, an alternative, natural method of producing cannabinoids, could have profound implications for the cannabis industry. In recent months, we have seen two Canadian LPs, Cronos Group (TSX: CRON) (NASDAQ: CRON) and Organigram (TSXV: OGI) (OTC: OGRMF) make investments that will allow them to pursue cannabinoid production through this method.

Very basically, biosynthesis is the formation of complex compounds from simple substance by living organisms. Cannabinoids are found in the cannabis plant, for example, but they can also be produced in other ways. In contrast to synthetic production, which creates molecules in the lab like analogs to naturally occurring cannabinoids, these compounds are the exact same as what cannabis expresses.

Here is a graphic from InMed Pharmaceuticals (TSX: IN) (OTC: IMLFF) that shows their process, which uses E. coli rather than yeast: 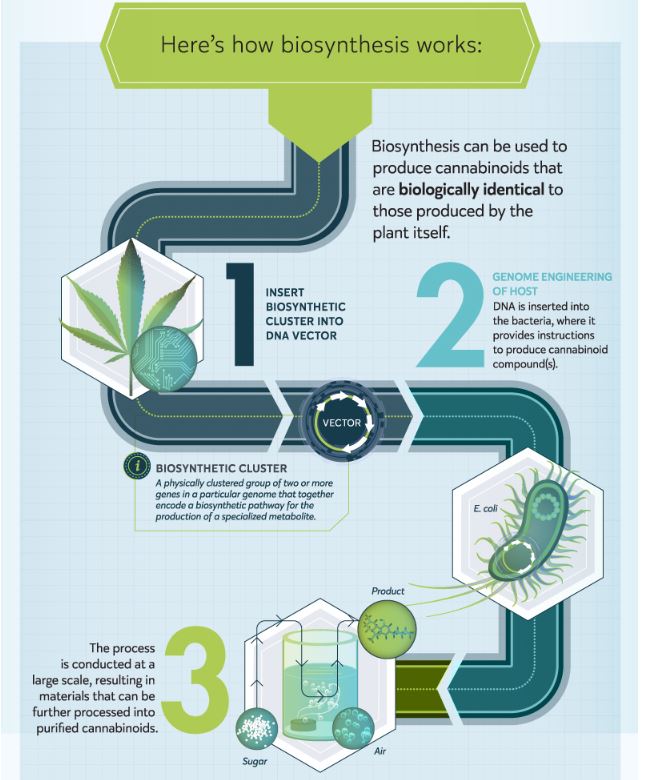 The key advantage to this process is that it results in higher purity and lower costs with a much lower carbon footprint than through extraction from cannabis. Importantly, these are the exact same compounds that would be produced from cannabis extraction.

What Are the Implications for the Cannabis Industry

If the cannabis industry were all about smoking or vaping flower, then producing cannabinoids from alternative methods wouldn’t be an issue, but mature markets for medical and consumer cannabis typically experience at least half of the sales generated from derivatives and ingestibles. These products may in the future use cannabinoids produced from biosynthesis rather than extracted from cannabis, wiping out demand for a large amount of production. To be clear, the industry may end up being overbuilt substantially if biosynthesis emerges as a scalable technology.

Biosynthesis appears to create cannabinoids with higher purity, which is an additional factor beyond cost that could spur its adoption. Additionally, the technology should be able to create cannabinoids that aren’t expressed significantly in the cannabis plant itself. These rarer cannabinoids are particularly appealing to pharmaceutical companies, and we could see biosynthesis become the de facto standard for that industry’s production rather than extracted cannabis, such as what GW Pharma uses for Epidiolex. In 2016, I confirmed that GW Pharma (NASDAQ: GWPH) is actively pursuing this technology.

Who Are the Players?

Thus far, I have identified 7 companies that are working on advancing biosynthesis for cannabinoid production:

Previously independent but recently acquired by Aurora Cannabis (TSX: ACB) (NYSE: ACB), Anandia Laboratories is a Canadian cannabis science powerhouse. The company has been publishing research on the topic since 2012, though it’s not clear exactly where their team, lead by Dr. Jonathan Page, is in terms of development. Hopefully its new owner will detail the company’s efforts.

Gingko Bioworks, a Massachusetts-based company founded in 2009 by MIT scientists and a participant in Y Combinator since 2014, recently partnered with Cronos Group to develop cannabinoids. The company is well-funded compared to others, tough it is working on applying the technology more broadly. Gingko includes Bill Gates among its investors, and the company has raised a stunning $429 million.

The Cronos deal, which was announced in early September and has Cronos investing $22 million in R&D and issuing up to 14.7 million shares to Gingko upon milestones being hit, aims to develop THC, CBA, CBC, CBG, THCV, CBGV, CBDV and CBCV. On the conference call, Cronos indicated it could be more than a year before the first milestone of THC produced at less than $1000 per Kg for more than 200 liters.

Montreal-based Hyasynth Bio is a Licensed Dealer in Canada. The company had not raised significant money until recently, when Organigram participated in a funding round that took the form of a convertible secured debenture in three tranches totaling C$10 million. The initial investment was C$5 million, with milestones tied to the next two tranches. Organigram will have the option to purchase cannabinoids produced by Hyasynth. According to Organigram, the company has made CBG, CBD and other cannabinoids cost effectively.

As the only publicly-traded company among its peers, there is significant financial information available for InMed Pharmaceuticals, which is based in Canada and trades on the TSX (IN) and the OTC (IMLFF). Those interested can download their most recent investor presentation.

The company differs from rivals that use yeast, as its process employs E. coli. The company is developing its technology along with a bioinformatics platform that has a goal to select drugs to develop with a high probability of success, targeting initially glaucoma and epidermolysis bullosa (a genetic skin condition).